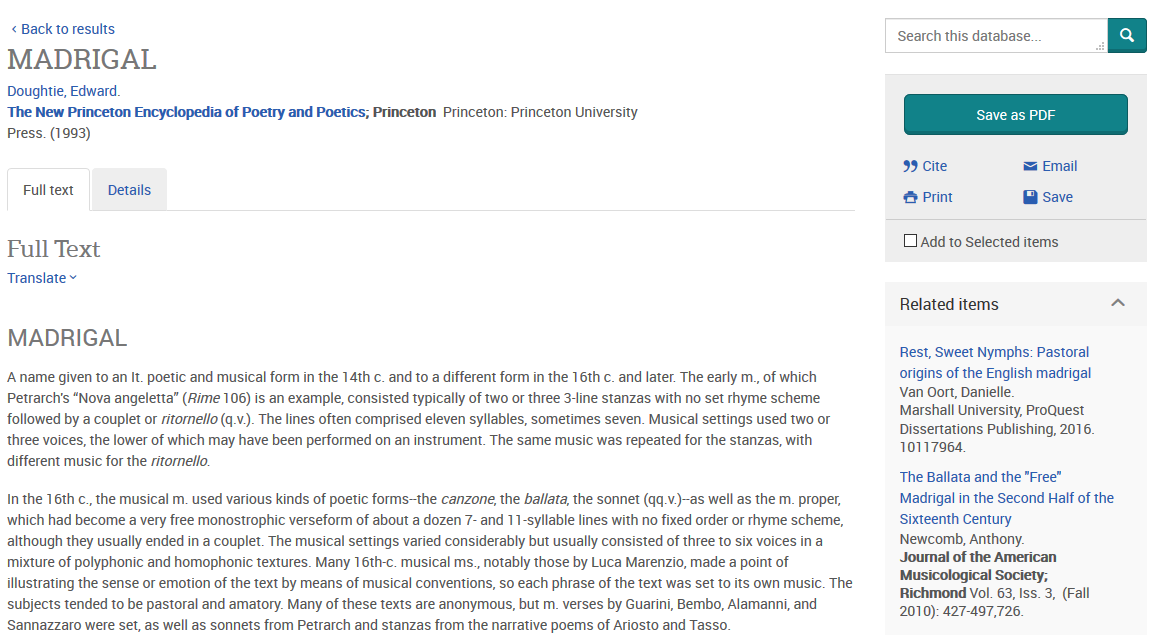 ProQuest One Literature includes 18,000 encyclopedias, companions, and dictionaries which provide background and context.

Literature Online offers detailed bibliographies for over 1,500 major authors. Our editorial policy in compiling these bibliographies has been to record both the literary and non-literary works of Literature Online authors, giving bibliographic details of the first publication of every work. Subsequent republications will not normally be included unless fundamental revisions have been undertaken. In cases where authors were voluminous contributors to newspapers, journals or periodicals, summary records of titles are given. Entries where the author performed the role of contributor, correspondent, editor or annotator are also recorded. Wherever possible, the most authoritative modern edition of the complete or selected works has also been indicated.

Literature Online includes biographical entries for over 5,800 authors. The majority of these are unique to ProQuest Literature services, as they have been specially commissioned for either Literature Online or for one of our Literature Collections. These biographies are either written by subject specialists working in the relevant academic field, or by our highly qualified in-house team of researchers, working to strict editorial guidelines, and are intended as a scholarly yet accessible introduction to a writer's life, works, context and critical reception. The service also contains biographies licensed from third-party publishers. Our editorial team are continually working to add to our biography provision by commissioning new biographies and revising or updating existing material.

In 1999-2000, we undertook a major program of biography creation for major authors from the medieval period to the present day. Under the guidance of six editors with responsibility for each literary period, over 300 new biographies were commissioned from experts in the field. These editors were:

Revision and additions to Literature Online biographies have been ongoing since this project was completed.

Literature Online contains electronic versions of the following print reference works; these can be searched individually or as a group from the Reference search page, and users can also browse the contents from Complete Contents:

Literature Online includes the KnowledgeNotesTM student guides, a unique collection of critical introductions to major literary works. These high-quality academic resources are tailored to the needs of literature students and serve as a complement to the guidance provided by lecturers and seminar teachers.

As well as providing at-a-glance information, KnowledgeNotes guides also challenge students to be self-motivated and to read critically. Each guide has been written by a scholar with graduate-level expertise in the relevant area, working closely with the KnowledgeNotes team of specialist editors:

Drawing on contemporary critical and theoretical approaches, the author provokes active engagement with the text by highlighting salient themes and suggesting areas for further enquiry. The specialist knowledge of our authors and editors means that students are guided through the text by a process that models the interpretive processes and explanatory methods of an experienced critical reader.

Each guide combines detailed analysis of a literary text with introductory and contextual material and suggestions for further reading. The range of texts covered reflects the full range of British, European and American literature studied as part of contemporary undergraduate courses, including the plays of Aeschylus, Shakespeare and Tony Kushner, the poems of Chaucer, Poe and Eliot, the novels of Jane Austen, Franz Kafka and Virginia Woolf, and the short stories of James Joyce, Flannery O'Connor and Sandra Cisneros.

Every KnowledgeNotes guide begins with an Overview, which places the text and author in context, lists the author's principal works and gives a breakdown of all the characters who appear in the text. This is followed by a Summary, which gives a synopsis of the Plot, a brief introduction to the text's Style and introduces the main Themes and Motifs. The Highlights section gives a detailed reading of the text, broken down into chapters, scenes or sections where applicable. Four learning devices are used to draw the reader's attention to significant points in the text: Take Home Points, which signal key elements in a passage, Exploration Points, which direct students towards areas of possible further study and research, Theme Alerts which identify passages relevant to the themes outlined in the Summary, and Quotables, which locate and interpret frequently-quoted passages. The guide ends with a selection of Works Consulted, which points users towards further reading and also serves as an example of correct scholarly citation.