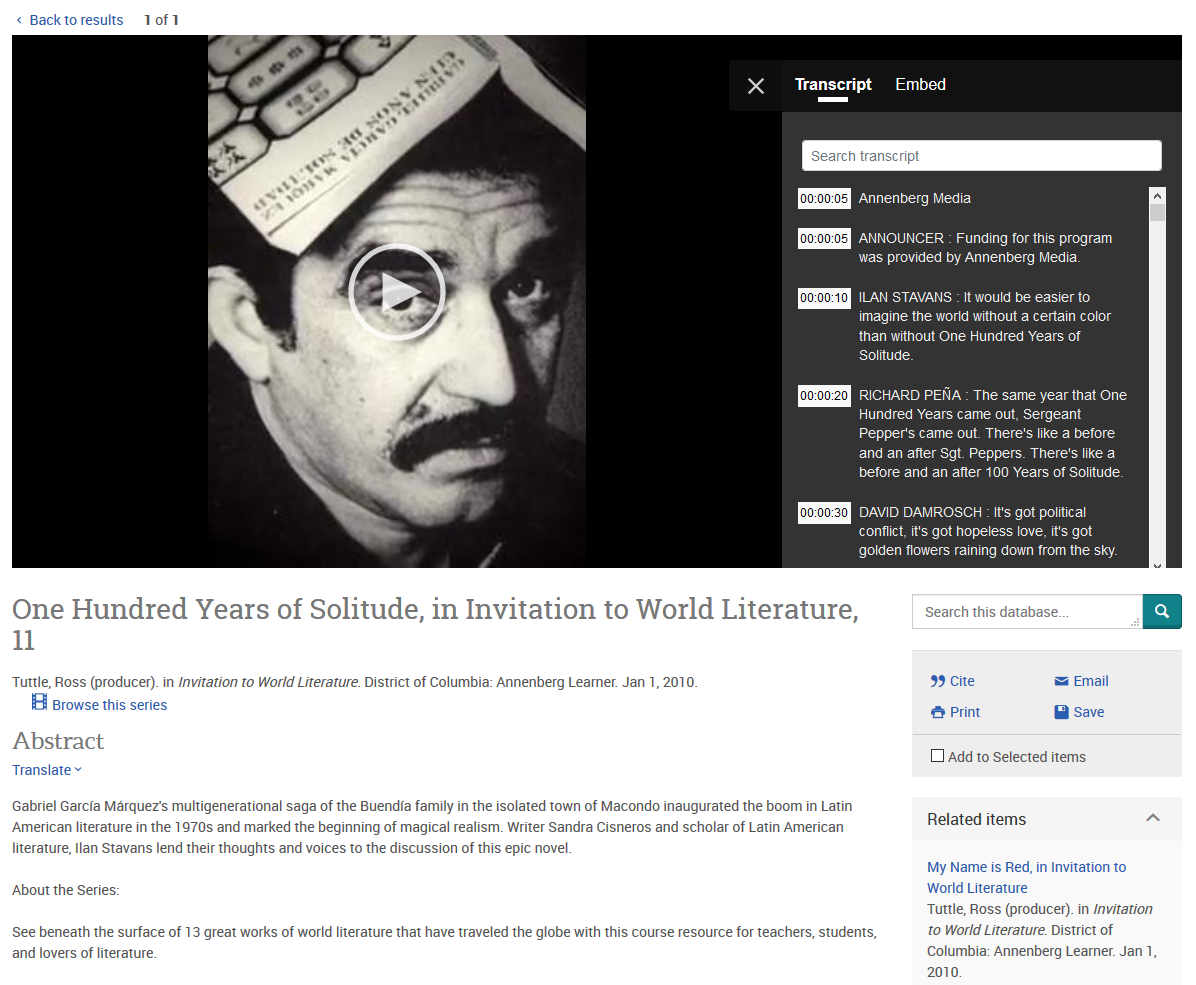 ProQuest One Literature includes 1,300 videos and 1,000 audio tracks of performances and author interviews.

Poets on Screen is a groundbreaking video collection specially commissioned for inclusion in Literature Online and produced in collaboration with some of the foremost poets living and working in the English-speaking world today.

The collection contains nearly 900 filmed readings by contemporary poets of both contemporary and classic poems, and provides a unique opportunity to hear and see major authors interpreting their own works and the works of their contemporaries and predecessors. The recordings have been made at a variety of public readings or directly to camera; together they capture and preserve the full diversity of the contemporary poetic scene. Many readings are accompanied by introductory passages in which the poet discusses his or her own work or the work of an admired predecessor.

Highlights of the Poets on Screen library include Jayne Cortez's performance of 'I See Chano Pozo', Blake Morrison discussing his poem 'Pendle Witches', Imtiaz Dharker reading Browning's 'My Last Duchess', Jerome Rothenberg reading and discussing eleven of his own poems, including 'At Tsukiji Market, Tokyo', and Fleur Adcock reading from her own verse and from a selection of works by Donne, Marvell, Coleridge and Edward Thomas.

The complete Arkangel Shakespeare contains fully dramatized unabridged recordings of all of Shakespeares 38 plays. Each play is recorded by noted actors, many of whom were trained at the Royal Shakespeare Company, such as Simon Russell Beale, Joseph Fiennes, David Tennant, Niamh Cusack and Sir John Gielgud and includes sound effects and music to bring the plays further to life.

From the William Shakespeare Author's page the audio plays can be easily reached from the related special section Related Audio.

From the Publications section you can select the Audio and Video Works under the Source Type narrow Filter on the left, then you select the third type, Shakespeare Audio. Under the 2003 issue year you'll obtain the alphabetical list by title.

Clicking on the title of a play will bring you to the individual audio plays page from which you will be able to view and select individual scenes to access. Though the audio recordings were not created using any of the editions available in Full Text, the 19th Century Cambridge University Press edition is the closest textually to the modern edition used.

View complete cast and production details for all recordings.

We have added over 920 links to Poetry Archive recordings with links for featured poets appearing on their Author Page as well as under the Audio and Video Works Source Type in the Publications section. Clips are listed alphabetically, by author, and will open in a new browser tab or window.