About the Freedman's Bank Records

This database is an index to Freedman's Savings and Trust Company's registers of signatures of depositors. Some information that may be found in this index includes:

Note: Not all entries will contain all of this information. Forms changed over time and differed based upon location of the bank branch.

This collection is a great source for genealogists researching their African American heritage, or family members that were indentured regardless of race, because of the amount of personal information recorded for each individual in it. Be sure to view the corresponding image of the original document associated with your ancestor in order to obtain all possible information available for them.

About Freedman's Savings and Trust Company

The Freedman's Savings and Trust Company was incorporated in 1865 by an act signed by President Abraham Lincoln. The purpose of the company was to create an institution where former slaves and their dependents could place and save their money. The original bank was first headquartered in New York and later moved to Washington, D.C. Shortly thereafter branch offices opened in other cities, primarily in ones in the south where there was a larger population of African Americans. Eventually there were 37 branch offices in 17 states with approximately 70,000 depositors (over the banks lifetime) and deposits of more than $57 million. In 1874, as a result of mismanagement, fraud, and other events and situations, Freedman's Bank closed.

About the Registers of Signatures of Depositors

Twenty-nine of the thirty-seven branches of the bank had records that have survived and been microfilmed. The registers of signatures of depositors collection contains forms required by the bank for each individual making a deposit to fill out. These forms asked questions regarding personal information and identification as well as required a signature. The exact questions asked on each form varied between years and branches.

NOTE: Some of the above information taken from The Freedman's Savings and Trust Company and African American Genealogical Research by Reginald Washington.

To see enlarged versions of the images on this page, right click on the image and select "Open in a new tab." 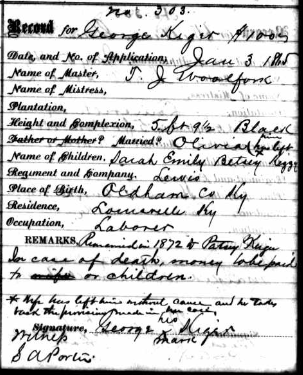 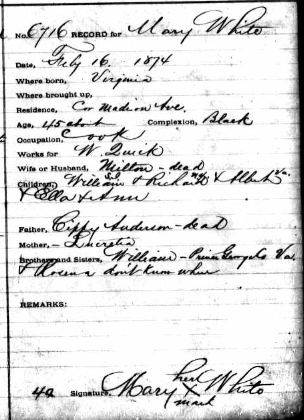