Containing more than 1,500 dramatic works from the colonial period to the beginning of the twentieth century, American Drama 1714–1915 is the largest electronic collection of American dramatic writing of its kind. It provides literary researchers and historians with a comprehensive survey of American dramaturgy from its origins up to the era of sensational melodrama and manners comedy exemplified by the work of such playwrights as David Belasco, Clyde Fitch and William Vaughn Moody. Full details of the works included in American Drama 1714–1915 are given in the bibliography.

Early landmark texts represented in the collection include Robert Hunter's satire Androboros (1714), the earliest printed American play, and Thomas Godfrey's tragedy The Prince of Parthia (1765), the first American play professionally performed on an American stage. Highlights from the nineteenth century include George Aiken's stage adaptation of Uncle Tom's Cabin, one of the most popular dramatic works of its period both in America and Europe, The Escape; or, A Leap for Freedom (1857) by William Wells Brown, and The Octoroon (1859), widely recognised as Dion Boucicault's most important American-themed play.

Frequently-studied plays by major dramatists are placed in the context provided by the dramatic writings of lesser-known contemporaries and canonical authors not primarily remembered for their dramatic works, such as Louisa May Alcott and Emma Lazarus. 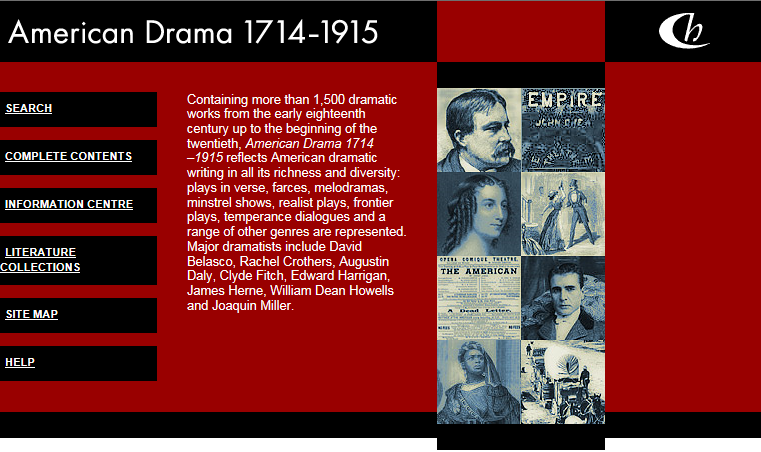 American Drama 1714–1915 reflects American dramatic writing in all its richness and diversity: plays in verse, farces, melodramas, minstrel shows, realist plays, frontier plays, temperance dialogues and a range of other genres are represented.