The bibliographic basis of American Poetry is the Bibliography of American Literature (Yale University Press, 1955–1991). This has been extensively supplemented with additional poets recommended by the Editorial Board to provide a more thorough representation. The database aims to include the complete works of all major poets and a substantial number of secondary figures. It principally covers the period to 1900, although a few poets active after 1900 are also included.

The collection begins with early Colonial poems such as John Wilson's 'A Song of Thanksgiving for the Lasting Remembrance of God's Wonderful Works' (1603), William Morrell's 'New England' (1625) and the complete works of Anne Bradstreet and Edward Taylor, and continues through to early twentieth-century writers such as Adelaide Crapsey and Vachel Lindsay. For the first time, major canonical poets, such as Emily Dickinson, Edgar Allan Poe, Phillis Wheatley, Walt Whitman and Herman Melville, and important literary groups, such as the Transcendentalists and the Knickerbocker school, can be read alongside substantial bodies of work by less familiar names such as Elizabeth Akers Allen, Richard Emmons, Lemuel Hopkins and Emma Lazarus.

Full details of the contents of American Poetry are given in the bibliography. 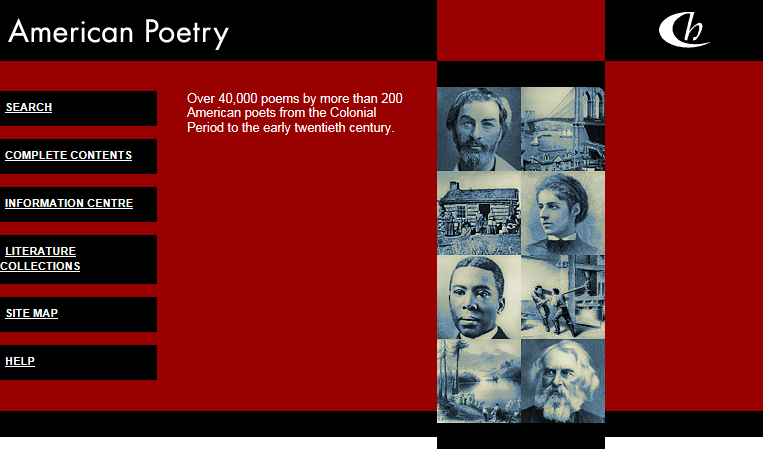 The entire text of each poem is included. Any accompanying text written by the poet and forming an integral part of the poem, such as dedications, notes, arguments and epigraphs, is also generally included.

Volume-specific front and back matter, such as advertisements, prefaces, introductions, editorial apparatus, dedicatory epistles, biographies, glossaries and indexes is excluded.