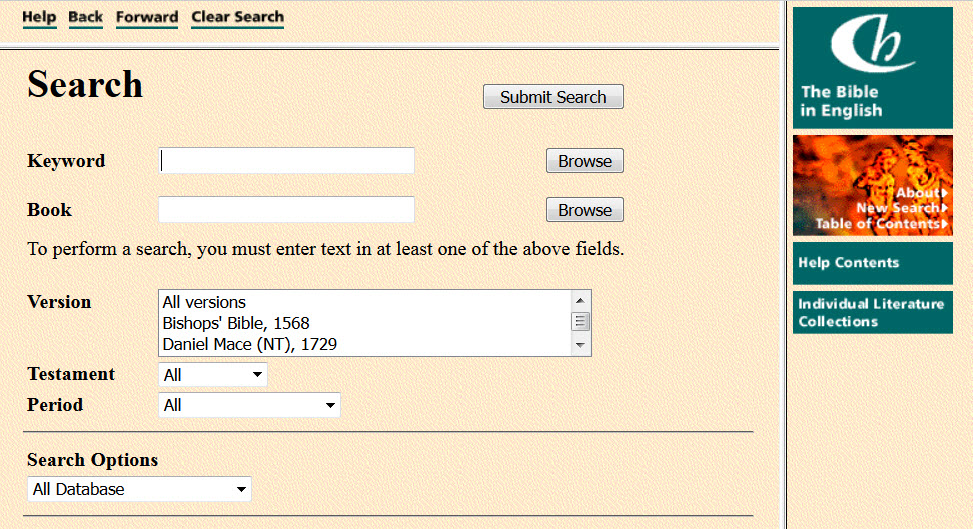 About the Bible in English

The Bible in English (990-1970) contains twenty versions of the Bible. In addition to the twelve complete Bibles, there are five New Testament works, two Gospel works and William Tyndale's New Testament, Pentateuch and Jonah translations.

The complete English text of each edition is included, with all prefatory matter, notes, running heads and glossaries. In cases where editorial matter is not contemporary with the text (Anglo-Saxon and Wycliffe versions) it is omitted.

For scholars of English literature, particular attention has been given to the Renaissance period. All the most significant texts from Tyndale to the King James Bible, including the highly influential Coverdale, Bishops' and Geneva Bibles, appear. For researchers in the development of the English language, texts from all eras are included, with emphasis upon versions that closely represent its contemporary state. For biblical and theological scholars, texts from the Protestant, Roman Catholic and non-conformist traditions are represented.

The texts were selected under the guidance of the Editorial Board with the aim of providing a balanced collection of editions covering the whole chronological period and appealing to scholars of a number of different disciplines.