The availability of publications varies according to the purchase/subscription arrangement of individual institutions. Available full text may be accessed from the results records (i.e. the document abstract). All results records also provide you with sufficient information to locate paper or microfiche copies of the source documents within the library.

What is the difference between the Bill Status vs. the Bill Version?

You've noticed that there is a pull-down menu to allow you to search for Bill Version as well as another field with a pull-down menu for Bill Status, and each document has both a version and a status- some of them even appear to be the same, so what's the difference?

Think of "status" as a location along the time-line or chronology of the bill- the status is how far along the path the bill has proceeded. The bill starts out by being introduced, then it is referred to committee, then it is reported out of committee, etc. So sometimes we might want to find all bills introduced on a particular topic, or we are looking for bill with a particular STATUS. So we are looking at the bills from a chronological perspective. Another way that you might hear this described is the "stage" of the legislative process. A search using the Bill Status menu searches the chronology section of the Bill Tracking Report, and the Bill Status field of the Bill Text.

As for versions of a Bill, each time a bill goes through a stage in the legislative process, it is printed by the GPO as a new version. So a bill version is a unique printed document.

When you select "Limit to" Bills & Laws only, you will see additional fields down the page. This helps you select specific bills to search. 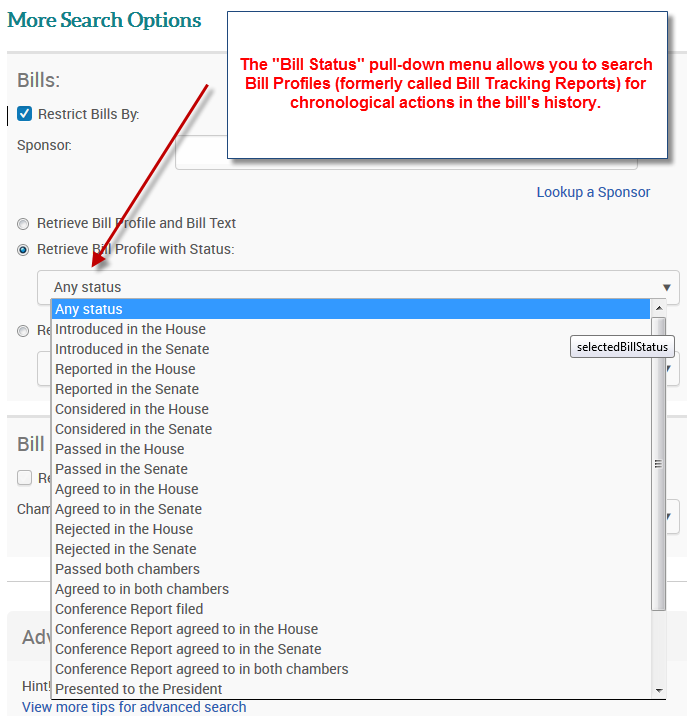 What is a bill?

What is a simple resolution?

For example, a simple resolution may offer condolences to the family of a deceased Member of Congress, or it may express the opinion of one Chamber or the other on foreign policy or other executive business.

What is a joint resolution?

A joint resolution, H.J. Res. or S.J. Res., is a legislative proposal that requires the approval of both Chambers and the signature of the President, just as a bill does, in order to have the force of law.

What is a concurrent resolution?

Beginning in the 55th Congress (1897), the concurrent resolutions passed by both Chambers have been printed as separate lists within the Statutes at Large.
From: http://www.gpo.gov/help/index.html#about_congressional_bills.htm

When you "limit to" only Bill & Laws, you will see additional field further down the page to help you search for specific bills. 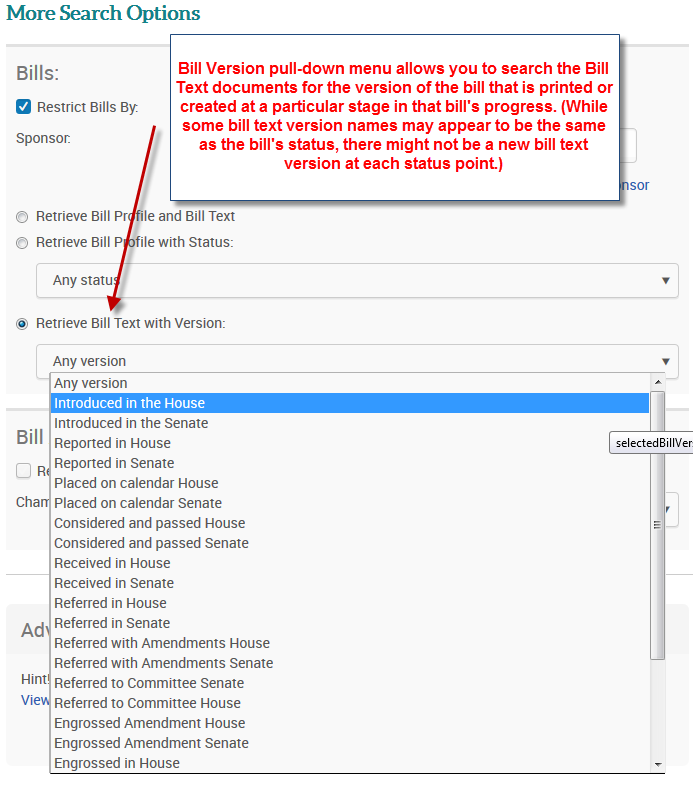