A guide to all aspects of ProQuest's Black Abolitionist Papers database including content, searching, and viewing results.

Black Abolitionist Papers are an add-on module of the Black Studies Center.

The primary source material in this collection will provide easily accessible and vital content for researchers, teachers, and students in many disciplines, including those that focus on such topics as:

The materials in this collection are wide-ranging in geographic scope. The majority of content, however, is concentrated on the United States, Canada, and the British Isles.

The digital collection reproduces, in full, the 17 reels of microfilmed content from the original collection. Unique, hand-written correspondence and documents comprise around 30% of this collection. Included in the collection are such types of primary documents as:

What is the ProQuest Black Abolitionist Papers database?

ProQuest's Black Abolitionist Papers (1830-1865) is an extraordinary, primary source collection and the first to comprehensively detail the extensive work of African Americans to abolish slavery in the United States prior to the Civil War. Covering the period 1830-1865, the collection presents the massive, international impact of African American activism against slavery, in the writings and publications of the activists themselves. The approximately 15,000 articles, documents, correspondence, proceedings, manuscripts, and literary works of almost 300 Black abolitionists show the full range of their activities in the United States, Canada, England, Scotland, Ireland, France and Germany. This collection, when first published in microfilm, literally transformed scholarly understanding of Black activism during this period. Now it is available in a searchable, easily accessible format for research, teaching, and study.

Black Abolitionist Papers represents a huge effort by a scholarly team, headed by C. Peter Ripley and George E. Carter, who recognized that African Americans were a pivotal and persuasive force in the 19th-century anti-slavery movement but that their work had been virtually ignored in scholarship prior to this collection. The team painstakingly identified African American activists through countless hours of research and scrutiny, bringing to light many names previously lost to history. Primary documents were gathered from more than 100 libraries and archives across the world. The set was microfilmed and published in 1981 and quickly established a significant shift in historical scholarship regarding Black leadership, activism, and community life during this period. The collection remains an unequalled, “pristine record of Black abolitionism.” 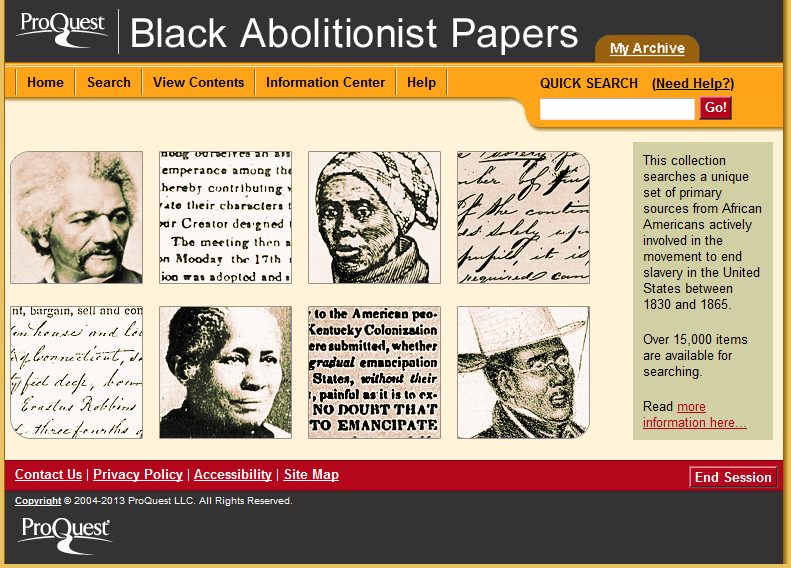