What are the Executive Branch Documents?

ProQuest Executive Branch Documents contains documents produced by Federal government departments, agencies, and commissions, spanning the years from our nation's founding through the mid-20th century.  These documents touch upon all aspects of U.S. social, political, and economic life, as well as major events in U.S. history, and provide points of comparison between the U.S, and selected foreign countries.

For research involving early Federal documents, the Checklist of Public Documents, 1789-1909 has been known as an indispensable and authoritative resource.  Popularly known as the 1909 Checklist, it was the only systematic effort to provide a complete listing of all documents published by the U.S. Government in its first 120 years.  Despite the importance of the documents listed in the Checklist, the contents have been inaccessible to most researchers due to the lack of a subject index.  In is also rare to find a complete collection of the Checklist documents at any single institution.  In addition, we have expanded this effort to include documents from 1910-1932.

For module 1, the Executive Branch Documents collection targets the entire range of executive branch publications listed in the authoritative 1909 Checklist.  1909 Checklist was created in 1911 by the U.S. Superintendent of Documents, and is the only systematic effort to provide a complete listing of all documents published by the U.S. Government in its first 120 years.

All modules target content not included in ProQuest Serial Set

Executive Branch Documents in the interface 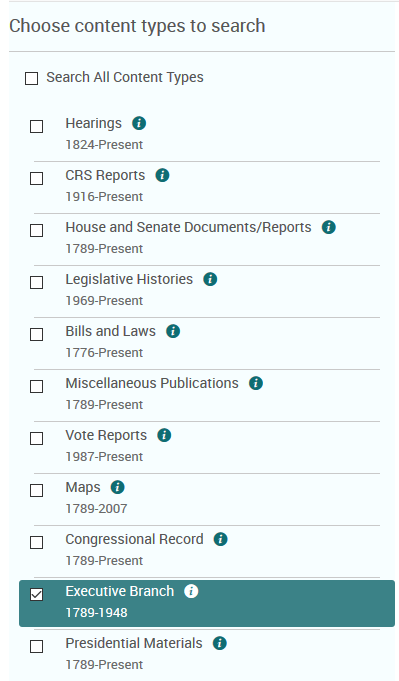 The search box for the Executive Branch Documents is included in the ProQuest Legislative & Executive Publications interface (sometimes called ProQuest Congressional) so that the legislative and executive branch publications may be searched together, or separately.