Early English Prose Fiction has been produced in association with the Salzburg Centre for Research on the Early English Novel (SCREEN).

Each text is reproduced in full, including all prefatory matter and annotation by the original author.  Texts are accompanied by bibliographic information relating to the source edition used.  Illustrations integral to the text are included, as are errata lists.

Authors and works have been selected under the guidance of the editorial board to meet the needs of academic teaching and research.  The guiding principle has been one of inclusiveness, particularly with regard to the many different types of fiction that characterise the period.

The collection excludes non-fictional prose and medieval ‘survivals’ (works pre-dating the period in question but printed within it).  Works of fiction translated from other languages are excluded, with one exception (Barclay’s romance Argenis, translated from Latin by Kingsmill Long).

Early English Prose Fiction is a balanced and representative survey of fictional prose in English from the period 1500­­­–1700, comprising more than 200 works.  The database includes numerous rare texts inaccessible in print form together with early editions of all the best-known works of the period, such as John Bunyan’s The Pilgrim’s Progress and Sir Philip Sidney’s Arcadia.  Many different kinds of fiction are represented, from prose romances (such as Boyle’s Parthenissa) through to popular jest books (such as Peele’s Merrie Conceited Iests and Skelton’s Merie Tales) and specimens of rogue literature (for example Settle’s The Notorious Impostor and the anonymous Life and Death of Mrs. Mary Frith, Commonly Called Mal Cutpurse).

Other highlights of the collection include:

A full list of works included in the collection is given in the bibliography. 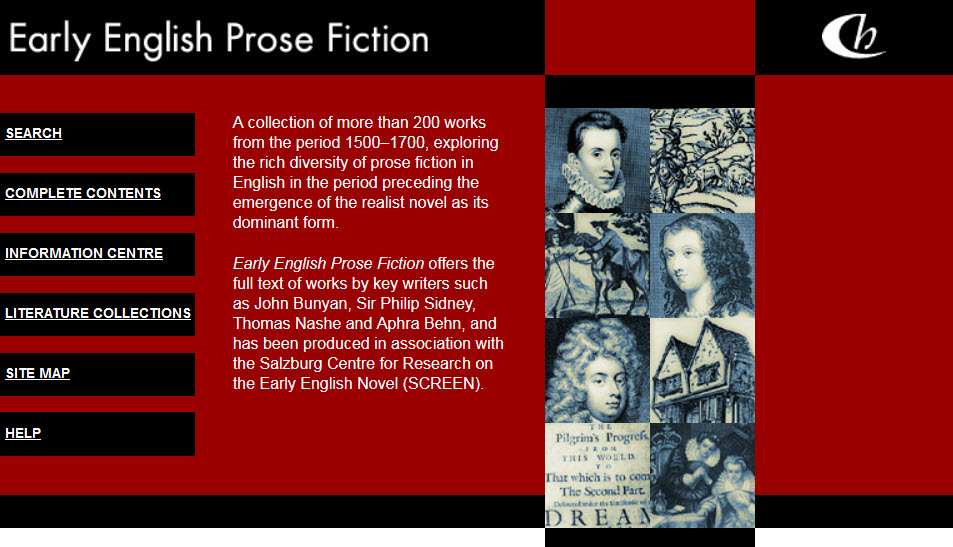