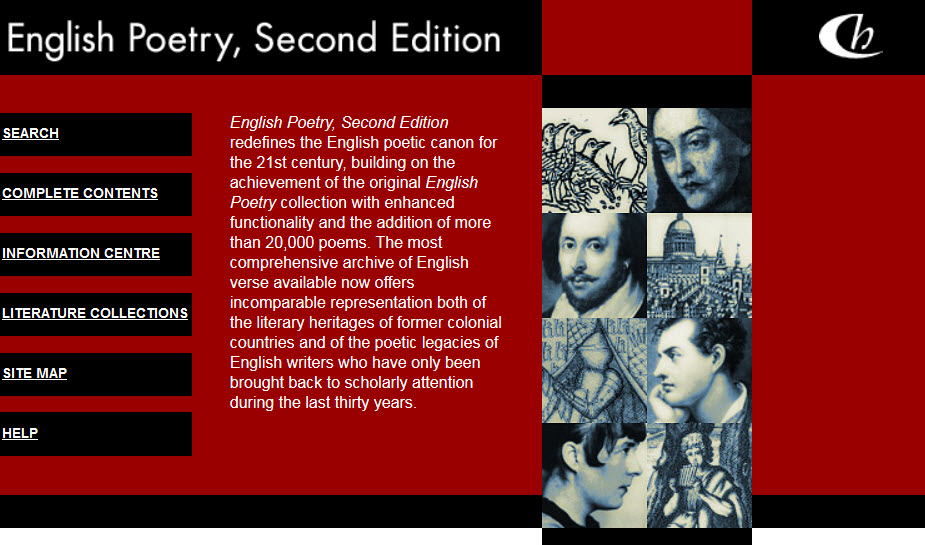 English Poetry, Second Edition redefines the English poetic canon for the 21st century, building on the achievement of the original English Poetry collection with the addition of more than 20,000 poems from several new categories.

On its launch (on CD-ROM), English Poetry was described by Edwin Morgan as a 'Shelleyan universal anthology waiting to be dipped into by random hands', and since then it has become recognised as an indispensable research tool for scholars and students from around the world. For the second edition of this ground-breaking project, the bibliographic basis has been brought up to date through the addition of works representing both of the literary heritages of Commonwealth and ex-colonial countries and of the poetic legacies of English writers who have only been brought back to scholarly attention during the last thirty years.

English Poetry, Second Edition contains over 183,000 poems, essentially comprising the complete canon of English poetry of the British Isles and the British Empire from the 8th century to the early 20th. Drawn from nearly 4,900 printed sources, more than 2,700 poets are represented. Full details of the volumes included in English Poetry, Second Edition are given in the bibliography.

The main bibliographic source for English Poetry, Second Edition is the New Cambridge Bibliography of English Literature (Cambridge University Press, 1969–72). The database aims to encompass the complete published corpus by all poets listed in NCBEL who were active between 1100 and 1900. The Anglo-Saxon period is represented by the complete six-volume series of the Anglo-Saxon Poetic Records, edited by George Philip Krapp and Elliott Van Kirk Dobbie (Columbia University Press, 1931–53). English Poetry, Second Edition also includes poetry written in English during the same period by authors from Ireland, Australia, New Zealand and other parts of the world, together with the work of additional English poets missing from NCBEL.

In addition, certain landmark anthologies were also recommended by the Editorial Board. These have been included in their entirety, for example:

Certain categories of material have not generally been included:

The Editorial Board nevertheless recommended exceptions to these criteria when works which did not meet them were considered too important to be excluded.