What is an Unpublished Hearing?

Many hearings are not printed. The law does not require publication, and each committee or subcommittee decides whether to publish a particular hearing.

Rules dictate when unpublished hearings are released from the National Archives. Senate hearings are usually released after 20 years; House hearings after 30 years. The exception is hearings that include classified or sensitive material; they can be held for up to 50 years.

About the ProQuest Unpublished Hearings

A quick note about unpublished hearings holdings from the ProQuest collections.

Since the initial retrospective modules were released, three modules of unpublished materials have been released. They are:

On the Basic Search page enter in the Search term.  For example the search term could be the Subject of the Hearing

The Basic Search will search Full Text for the Search Term and will return an unlimited number of results.

Alternatively, you can use the Advanced Search form to search more specifically in Hearings only, for the term unpublished and the keywords describing your subject. 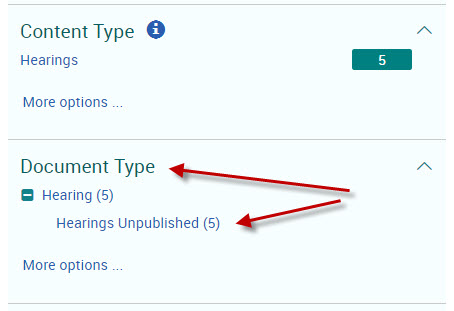 Facets can be found on the left hand side of the search results screen.