The War of the Rebellion: A Compilation of the Official Records of the Union and Confederate Armies: About

Publications from the Congressional Serial Set

For access to the material referenced in this guide, institutions must have ProQuest's U.S. Serial Set Digital Collection.

About the Rebellion Records

The Rebellion Records were compiled and published over approximately 20 years after the Civil War ended.   Because they were printed over a significant span of years, libraries have pulled these volumes into a separate shelved series as they don't sit together on the shelf if they are kept with the Congressional Serial Set.

There are more than 130 volumes (and close to 200 parts) in the official series, including the index and atlas volumes, and there is a separately published and indexed series of approximately 30 volumes of the Official Records of Union and Confederate Navies included in this bibliography.

Use the tabs above to view the individual series.

Content notes are from the snoypsis of the contents of volumes in the General Index, pgs XXXI-XLII.

General index to the entire work (except for the Naval Records) with all appendix containing additions and corrections of errors discovered in the several volumes after their publication. It also includes "Special Compilations" containing (1) a synopsis of the contents of volumes; (2) a special index for the principal armies, army corps, military divisions and departments; and (3) a table showing volumes pertaining to contemporaneous operations.

The index refers the user to specific volumes.  It is then necessary to consult the index at the back of the volume for pages etc.

The index has been included on each of the tabs for easy use.

The index to the Atlas accompanying the volumes contains a complete table of contents, to which reference should be had for detailed information, respecting the maps, sketches and illustrations therein published. 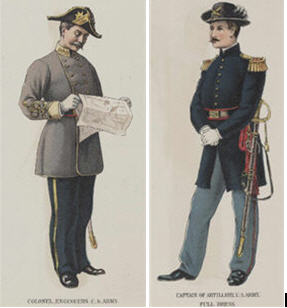