Editions and Adaptations of Shakespeare: Home

The contents have been chosen under the guidance of two Executive Editors with further advice from an international Editorial Advisory Board of Shakespeare scholars to provide a balanced collection of editions and adaptations from the seventeenth, eighteenth and nineteenth centuries. Many of the adaptations included in the database will be unfamiliar even to Shakespearean scholars and in order to provide some guidance as to the provenance and stage history of these works brief notes have been included at the beginning of each play, for which we are indebted to Professor Michael Dobson of the Roehampton Institute.

No attempt has been made to standardise the different conventions adopted by the various editors of Shakespeare's texts. The user should refer to the editors' own introductions for explanations (more or less full) of their particular practices. Act and scene numbering follows the source texts throughout; the user will inevitably encounter irregularities, particularly in early editions, where attributions to Shakespeare may be found to be at variance with modern consensus.

About Editions and Adaptations of Shakespeare

Editions and Adaptations of Shakespeare contains eleven major editions from the First Folio of 1623 to the Cambridge edition of 1863–66, twenty-eight separate contemporary printings of individual plays and poems, selected apocrypha and related works. In addition it contains more than one hundred adaptations, sequels and burlesques from the seventeenth, eighteenth and nineteenth centuries, including the whole of Bell's Acting Edition of Shakespeare's Plays (1774).

In the great majority of cases texts have been captured entire, with all introductions, prefaces, appendices, indices, notes editorial and authorial, essays, tables, figures, illustrations etc. reproduced in full. Half-title pages, publisher's advertisements and decorations have not been captured. Hypertext links have been created to connect editorial matter to the texts whenever possible. Where omissions have been made they are noted in the relevant bibliographic entry. 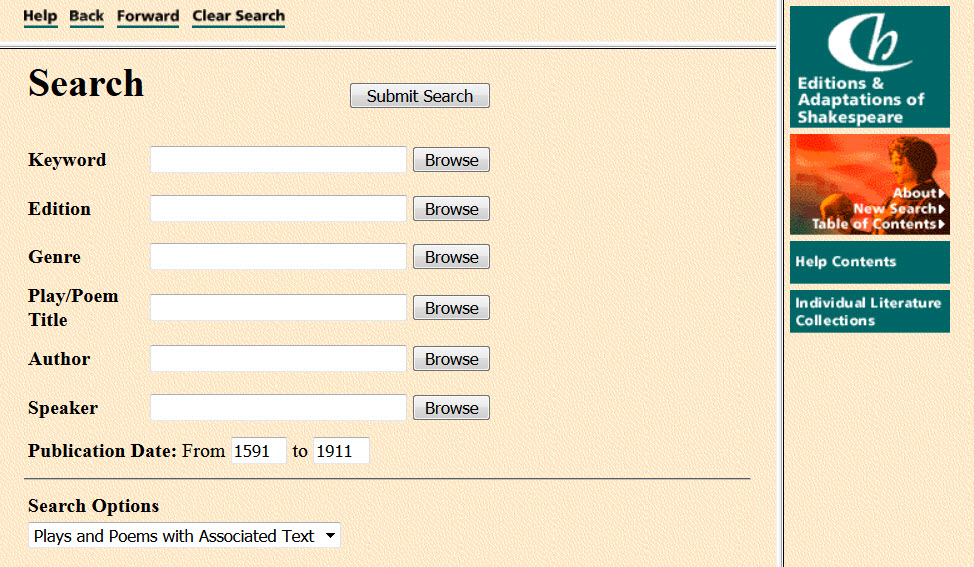