The BFI Film Index International can be cross-searched along with the AFI Catalog and FIAF International Index to Film Periodicals Database in the encompassing Screen Studies Collection (SSC). Consult the SSC LibGuide for more information.

Authoritative: users can access a vast film database that is compiled in association with highly respected institutions.

Dynamic: growing collection of work that is updated regularlly.

International coverage: full coverage of films from over 180 countries.

Cross-searchability: for customers with access also to AFI Catalog or to FIAF or all the 3 products the Proquest platform wil allow to cross search them via the meta database Screen Studies Collection, enabling cross-searching of film information and critical/theoretical film journal information created by a respected archive.

Film Index International provides in-depth indexing of over 125,000 films from the first silent movies to the latest blockbusters and biographical information for more than 900,000 personalities.

The Person records include complete biographical information, a list of Awards received, plus a complete list of the films the subject featured in.

Its rich content also includes references to film journals and periodical articles on film and film-makers.

The initial selection of records from SIFT for Film Index International is made by directors. The directors selected are those who have made a fiction film shown theatrically that is over 50 minutes in duration, released between 1928 and 1965 and those who have made a fiction film over 60 minutes in duration, post-1965. There are some exceptions; for example, directors with established careers who have made nothing but short films and directors who made feature-length documentaries. These are selected on an individual basis.

View our schedule at the link below to locate a session. Can't find what you are looking for or want to request an online or on-site session? Please email us at training@proquest.com. 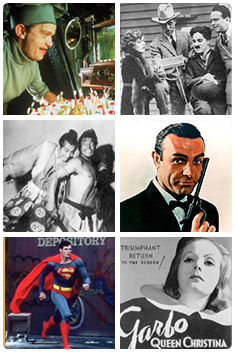